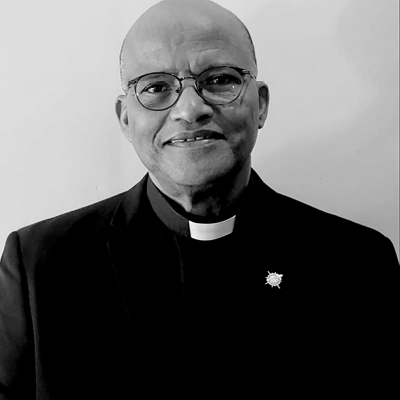 Rev. Lambrechts served as an ordained priest for 33 years in the province of Southern Africa, now as Provincial Canon. He has worked tirelessly, in leadership positions within the church, locally, nationally and internationally, as a bridge builder, ecumenically and within the interfaith community. Widely travelled he facilitated numerous workshops and retreats on issues of peace, reconciliation, justice, relationships, and liturgy in South Africa and as member of the Ecumenical Health Alliance in Africa and has represented the Anglican Church in Southern Africa in various workshops at CAPA

He has held positions on several provincial and diocesan commissions and was Director of Programmes for Anglican Aids from 2005- 2010. He was appointed in 2017, the Director Public Policy and Parliamentary Liaison in the office of Archbishop where he advised and represented the Archbishop on health policies.

Rev. Lambrechts strategic leadership in the area of Health has strengthened the vision of the Anglican Church of Southern Africa. He is passionate about working towards the establishment of parishes as health literacy networks where communities can access services at any given time.

Rev. Lambrechts was appointed by the Deputy President of South Africa, Kgalema Motlanthe, as chairperson of the South African National AIDS Council and is a member of the trust board representing civil society. He also served as the deputy chairperson with the Minister of Health, Dr Aaron Motsoaledi, on the country coordinating mechanism for The Global Fund in South Africa. He is currently chairperson of the Board of Johns Hopkins School of Public Health and Education in South Africa and serve as the Anglican Chaplain at the University of Stellenbosch.

Rev. Lambrechts is a lifelong fellow for the Southern Africa-United States Centre for Leadership and Public Values programme between Duke University and the Graduate School of Business, Cape Town.

He completed his Doctor of Philosophy Theological Studies degree (PhD) in 2019 at the University of the Western Cape,

Profiles:
BECOME A VOLUNTEER
We use cookies on our website to give you the most relevant experience by remembering your preferences and repeat visits. By clicking “Accept All”, you consent to the use of ALL the cookies. However, you may visit "Cookie Settings" to provide a controlled consent.
Cookie SettingsAccept All
Manage consent

This website uses cookies to improve your experience while you navigate through the website. Out of these, the cookies that are categorized as necessary are stored on your browser as they are essential for the working of basic functionalities of the website. We also use third-party cookies that help us analyze and understand how you use this website. These cookies will be stored in your browser only with your consent. You also have the option to opt-out of these cookies. But opting out of some of these cookies may affect your browsing experience.
Necessary Always Enabled
Necessary cookies are absolutely essential for the website to function properly. These cookies ensure basic functionalities and security features of the website, anonymously.
Functional
Functional cookies help to perform certain functionalities like sharing the content of the website on social media platforms, collect feedbacks, and other third-party features.
Performance
Performance cookies are used to understand and analyze the key performance indexes of the website which helps in delivering a better user experience for the visitors.
Analytics
Analytical cookies are used to understand how visitors interact with the website. These cookies help provide information on metrics the number of visitors, bounce rate, traffic source, etc.
Advertisement
Advertisement cookies are used to provide visitors with relevant ads and marketing campaigns. These cookies track visitors across websites and collect information to provide customized ads.
Others
Other uncategorized cookies are those that are being analyzed and have not been classified into a category as yet.
SAVE & ACCEPT